A giant outdoor theatre event for the whole family, Mind The Gap & Walk The Plank

With a soaring musical score, a cast of over 100, cherry pickers, tanks, 3D projections and a mechanical, moving ‘baby’ that’s bigger than a double decker bus, ZARA, a one-off, unique experience. A giant outdoor theatre event for the whole family, which tells the epic story of one learning disabled mother and her fight to protect her baby.

A Mind the Gap and Walk the Plank co-production: 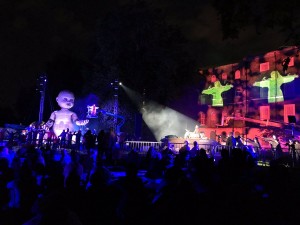 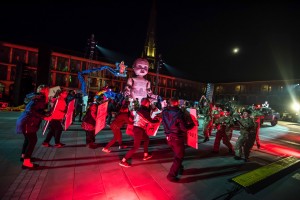 ZARA took over the courtyard of the stunning, recently refurbished Piece Hall in Halifax on 19 & 20 April 2019.

Zara headed to London for its second round of performances for two nights on Friday May 10 and Saturday May 11 where it received further critical acclaim.

‘This is Zara, an ambitious, original and delightfully weird…Like Brecht before her, Lee has struck lucky by finding an ingenious musical collaborator. Her Kurt Weill is Sarah Llewellyn, whose atmospheric score (and remarkably sophisticated song about poo – no, really) is the most impressive part of the show….Imagine an LSD trip directed by Ken Loach, and you’re halfway there..’ Tristram Fane Saunders, Telegraph May 2019

ZARA is the third instalment of the Daughters of Fortune project, which explores learning disability and parenthood. Sister projects include Anna – a forum theatre workshop, Mia – a national touring theatre performance, and Paige – a research project.

The Daughters of Fortune project would not have been possible if it wasn’t for financial support from the following funders.

Mind the Gap is one of Europe’s leading learning disability theatre companies.

Dr Kate Theodore has been the lead research partner on the project. She is a clinical psychologist and lecturer who works in the Psychology department at Royal Holloway, University of London.