The Fall of Man

Music and sound for Red Shift Theatre’s sold out show for the Edinburgh Festival 09 and a 2010-2011 UK tour.

Following a sell out season in 2009 at the Edinburgh Fringe Festival at The Pleasance and the celebrated Fringe First winners Red Shift Theatre’s show went on to tour throughout 2010 & 2011, impressing audiences and industry observers at Bristol’s Tobacco Factory, Taunton’s Brewhouse Theatre and Lincoln’s Drill Hall Arts Centre

Slovenian nanny Veronica is visited in the early hours by Peter – father of the children she minds. Meanwhile Satan, bent on carnage, tears streaming down his face, rushes through the dark void. The affair disintegrates, spiralling beyond its authors’ control. The audience huddle around Veronica’s bed sharing rich words and surprising images, explicit and familiar.

Red Shift has chosen one of the greats – Milton’s Paradise Lost – and uses it as a lens through which to magnify the intense, guilt-ridden antics of human beings unable to keep their hands off one-another, despite the awful fall-out they know will come.

Other Collaborations with Red Shift Theatre 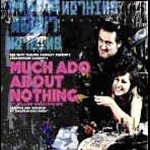