A sound-fest mix at London’s Halo 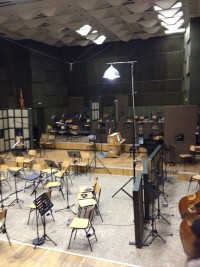 Inside the FAMES Orchestra Studio, Macedonia

The making of A Short Epic About Love, Josephine Halbert’s glamorous 1960s short about the other love story during the filming of “Cleopatra” has finally come to an end which took both Sarah and co-composer Karen Hutt from London all the way to Macedonia. Watch the trailer

Here are  a few words from the director:

Inside HALO Studios in London for A Short Epic About Love

An adventure for all leading to the final sound-fest mix at London’s Halo with the help of the excellent skills of both Michele Woods, Supervising Sound Editor and Howard Bargroff, Re-recording Mixer. A thanks also to David Tobin for his great work”.

A Short Epic About Love will be released onto the Festival Circuit and screened at various venues throughout 2013 and 2014.

For more music, photos or information about this film, please visit the films’ production page. CB

We are please to announce that we had 4 semi-finalist places for 2012 UK Songwriting Contest.

The UK Songwriting Contest attracts the best and most serious songwriters internationally, enabling artists to showcase their work to the UK music industry.  It is the only contest established with respected bodies such as The BRIT Trust and Music Aid International, with judges ranging from Sting’s producer Kipper Eldridge, Oasis’ legendary producer on Ellis and Paul McCartney’s producer and arranger Richard Niles.

Here are some extracts, enjoy! CB

As snowy days and cold spells bring us back to reality in the post-festive season, here is a little tingly treat to remind us of the summer gone by, when dazzling dancers still spun on their heads, young gentlemen gracefully gallivanted along tight wires to seduce their belles, Ethiopian jugglers nonchalantly juggled 12 magic clubs and cheeky Ukrainian beaux jaw-droppingly juggled each other! CB

Here is a marvelous little snippet of summer filmed and edited by Tonal’s talented Leah Llewellyn.

And for those pining for summer, all the music is available to buy on Itunes, Amazon and CD Baby!

If you missed the show last summer, find out more about The Saturday Book here.

As promised, the music from The Saturday Book, Giffords Circus’ latest show is finally available to buy on Amazon along with the jazzy Yasmine a Musical and the the epic War and Peace album

You can also give the music as a present as a Gift Certificate that you can either deliver by hand or via email, thus enabling the lucky recipient to download the music themselves, directly onto their computer. Find out more

‘Perfect for Christmas!’ I hear you cry! Yes, there simply couldn’t be a better stocking filler!

STOP PRESS: The Saturday Book Album is OUT!

If you are pining for spinning top hats, glamorous garters and daredevil melodies in this cold and miserable run up to Christmas, then the swinging, toe-tapping and tantalizing tracks from the album The Saturday Book are what you need!

More heart-warming than the sweetest glug of mulled wine, more delectable than the spiciest mouthful of mince pie and definitely more vibrant, tongue-in-cheek, enthralling than any awkward family meal, this album is the perfect remedy for yet another family Christmas! (And it’s also a great accompaniment to an already lively one!)

The music composed by Sarah was marvelously performed by the Giffords Circus Band and recorded & mastered by the skilled James Towler in Steve Winwood’s Wincraft Studios in the Cotswolds.

The music for The Saturday Book is now available to buy either as a whole album or individual tracks on the Itunes Store, CD Baby, and on soon Amazon!

I’ve even bought a copy for my own parents!

A Thursday Night In Manchester

A Thursday night with Sarah in Manchester at the Contact Theatre and what a night! 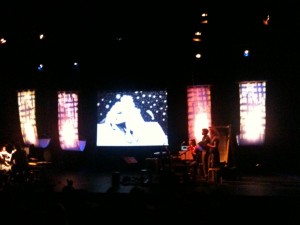 The story was based on the classical tale of Homer’s Odyssey and the illustrations brought the characters to life whilst the music told it’s own tale. The venue was perfect and the company contagious. Laughter without actors and a story without words. This really was an exceptional show – look out for their next tour!

Thank you Francesca and Sarah for a night to remember.

Ruth O’Reilly, TONAL’s associate French Horn player has just confirmed that TONAL’s team really can cater for any form of musical endeavour, by joining Bach to Baby as a guest artist for their December run.

Bach to Baby is an innovative classical concert series for babies and their carers to enjoy together, making world class performers available to all ages, a brilliant concept in a society where tolerance for crying babies is extremely low!

They will be touring around London throughout the festive season, one not to be missed if you have little ones!
Read more about Bach to Baby and Ruth as she is this month’s featured guest artist! 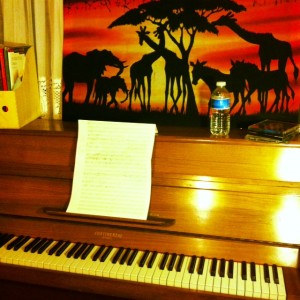 As writing for Cinelove 62 is already well underway, the latest short film that Sarah is working on, notes are already flying around the room here, an echo to the majestic and glamorous times of the 1960s’ Hollywood .

Here are some the sounds which have been booming, bouncing and blaring out of the dining room today, a few clues as to what the finished product will sound like. 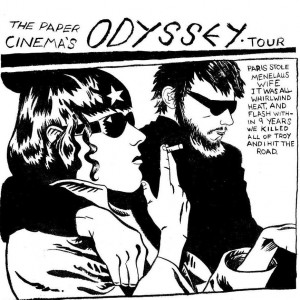 ance to see Francesca play in Paper Cinema, ‘an original form of puppetry, which uses the language of animation, music, film and theatre to lead the viewer through a variety of stories’ performing on Monday in warwick, then Brighton, Colchester, Lancaster and Manchester, I’m going to see it in Manchester on the 29th, can’t wait. SL

Its Claire Barbier’s  30th birthday today. She is back in Paris after a tour with Orchestra Pirouette This week I’ve been working on some of her songs we collaborated on earlier this year, you can hear some extracts from these lovely tracks here. I’ll be adding more songs over the next few weeks. Really looking forward to getting together again in the New Year and working towards recording an album together. Happy Birthday Claire, enjoy! 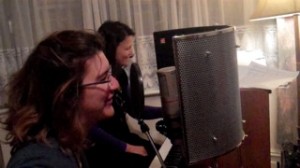