The score for this show was inspired by and pays tribute to the swing music of the 40s, the wonderfully irreverent work of the legendary Spike Jones and his City Slickers, the harmonies of the Andrews Sisters and the scat singing style pioneered by artists such as the fabulous Ella Fitzgerald.

Above all, Yasmine Smart provided the catalyst for many of the pieces portraying snapshots of her life and work, as she became a true Queen of the Ring. 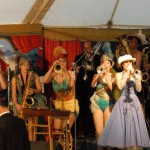 Other Collaborations with Giffords Circus