A pop-up exhibition on UK tour Aug to Dec 2019, featuring a spoken word with music piece by Sarah.

An 18 month project interviewing the women who formed the Greenham Common Peace Camp between 1981 and 2000 has been undertaken by Scary Little Girls in partnership with The Heroine Collective. 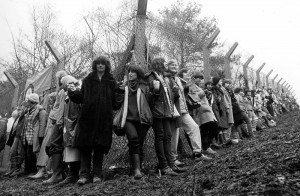 There is currently a nationwide touring pop up exhibition from Aug to Dec 2019. show details/ book tickets
It features photographs, archival materials, a video installation and a spoken word musical journey by Sarah, told through the voices of the fascinating women who were there at camp, what life was like, why they were there, it’s meaning then and how it resonates today.

All set in a Greenham-inspired tent, this exhibition really allows you to get an intimate look at the sights and sounds of the camp, gives voice to these radical women and asks you what change you want to see in the world.

Women from all over the world braved every weather and indignity to live together in order to protest peacefully and creatively about the threat to humankind from the nuclear arms race. In a time before the internet and mobile phones, the women and their supporters managed to organise thousands for actions like “Embrace the Base” in 1982, in which 30,000 women held hands around the edges of the common.
Though it was the largest demonstration in modern history, we have relatively little information about life on camp from the women themselves. For the first time, we’ll be looking at the truths behind the tabloids, the anecdotal details, the political strategies, and we’ll be bringing the heritage right into the hands of the public.